The early types of Tank 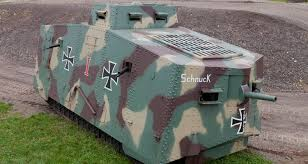 Tanks are mechanised armoured vehicles usually armed with a cannon and a machine gun. They have been in use since the First World War featuring in the end stages of the Battle of the Somme and decisively in the Battle of Cambrai. They were originally used by the Allies but were soon copied by other nations. To get an idea of what it is like to drive a tank, Tank Driving Days are available from https://www.armourgeddon.co.uk/tank-driving-experience.html.

Leonardo Di Vinci is credited with the first “tank”, a wooden mobile protection device, but this was never made.  These ideas were expanded on by the Czech General Jan Zizika who fitted out armoured mobile carriages pulled into battle by horses and bristling with cannon. The invention of the caterpillar track in the 17th century, to be used in farming and pulled by animals, inadvertently lent itself to the mechanised version later on. Captain Robert Falcon Scott mooted using a motorised caterpillar tracked device to accompany his team to the South Pole.

The First World War created scenarios that confounded traditional military tactics. The Mark 1 tank and the unused “Little Wille” were touted as the “land ships” that would punch a hole through no mans land and the German lines. The Germans developed the lumbering A7V or used captured British tanks.

The tank did not end trench warfare but it did show that future conflicts would have to be fought differently.